The CIPD has released a report, Conflict management: a shift in direction? It has a lot of interesting information about how employers are dealing with employment disputes, post-fees.

But I was particularly struck by the estimates of how long employers spend dealing with disciplinary matters internally, compared with the time taken to settle disputes or deal with tribunal proceedings. 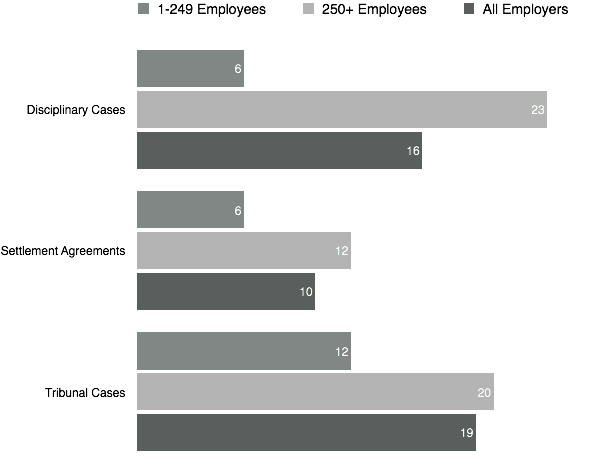 People often suggest that the tribunal process needs to be streamlined, so that parties – especially employers – are less burdened by it. I think the CIPD report suggests that will be difficult. Not only are the amounts of time being spent not that high; they’ve not much longer than it takes to deal with a disciplinary issue internally.

Why would we expect the tribunal process to be substantively less labour intensive than an employer’s internal process? And, surely employers are not spending significantly more time dealing with these issues than they need to?

But, you can also look at it the other way. Going to tribunal doubles (or, if you’re a smaller employer triples) the time taken to resolve an issue. That’s a significant additional cost for any business. If you assume that all that work was done by a single employee, they could spend 13% of their year dealing with a single disciplinary matter from start to end. You can certainly see the pressure on employers to agree a settlement – significantly less time needed there – rather than progress to the tribunal.

For myself, I think that’s part of what you have to expect if you own or manage a business the employs people. A small number (and it is a very small number compared with the total number of employees) may bring a claim. And, if they do, you will have to spend time dealing with it. It’s as much a part of running your business as paying your taxes, dealing with your customers and worrying about your competition eating into your market share. All of which can, no doubt, be difficult and stressful. But I think it’s idle and silly to suggest that tribunal litigation, when it happens, isn’t frustrating for employers, especially small ones. It obviously is.

It is interesting though to compare these statistics to those in the government’s survey of employment tribunal applications, which also provides information about how long employers spend dealing with tribunal claims, broken down by the number of people employed by the respondent. 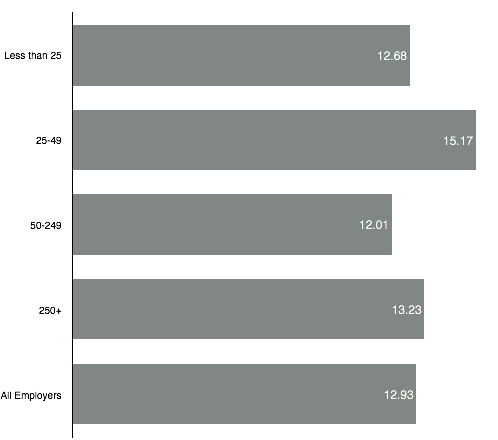 Interestingly, although the surveys broadly agree about the amount of time that employers spend dealing with tribunal case, the SETA survey doesn’t suggest that the size of the employer makes much difference.

Also interesting is that the SETA survey also provides information on the median average time spent as well as the mean average. 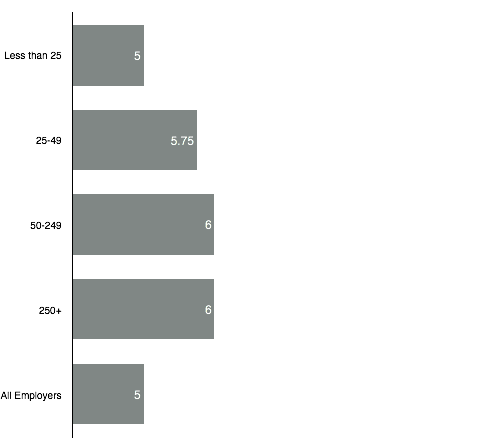 This strongly suggests to me that the figures in CIPD report (and the mean average in the SETA survey) are pulled up by a small number of long and complex cases, which take a very long time to resolve both internally and in the tribunal. Most tribunal cases take less time for employers than the CIPD report, at first glance, might suggest. And, I suspect, the same is true of internal disciplinary matters.

Finally, I think it’s worth bearing in mind that the CIPD survey results are affected by the pool of people surveyed. That is, members of the YouGov Plc GB panel and CIPD members. I’m not sure how representative the YouGov Plc GB panel is, but CIPD members are definitely not representative of businesses in general. CIPD members are people with a recognised and respected professional qualification. Essentially, I doubt many rogue employers who don’t care about the law or decent HR practice answered the survey (or, for that matter, incompetent employers who just don’t know what they’re doing). The survey reflects how a particular segment of competent, professional employers deal with workplace disputes. It’s a true picture; but a partial one.